Background:
I had shoulder surgery in December which put my running on the shelf for 8 weeks. For the first month, I had to run with my arm in a sling, but in March, I was fully cleared to run. Although I was cleared to run, I was still not cleared to run trails. I was finally cleared for trail running in April. The only problem, with all the rain we received, I only ran once on the trails for about 3 miles.

I had run multiple 8 mile runs, a couple of 10 mile runs, and one 13 mile run. Unfortunately, all but one 10 mile run was on a flat, gravel park path. To say I was undertrained is a bit of an understatement.

Race:
I left my house at about 5:50 and made it to the race location around 7:00. After picking up my race packet, I relaxed and chatted with a few friends. At about 7:55 we started to line up. 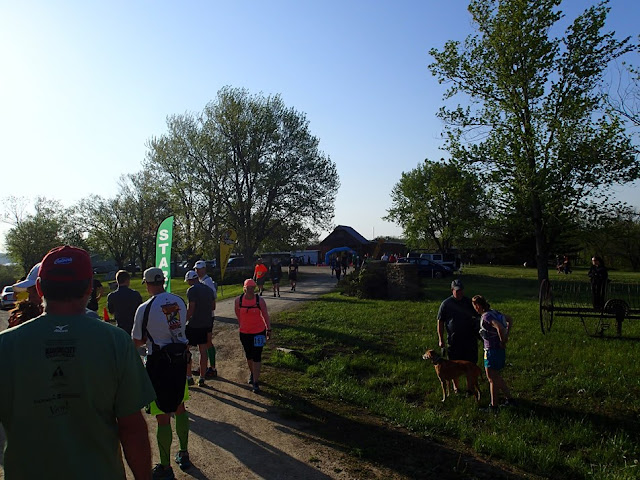 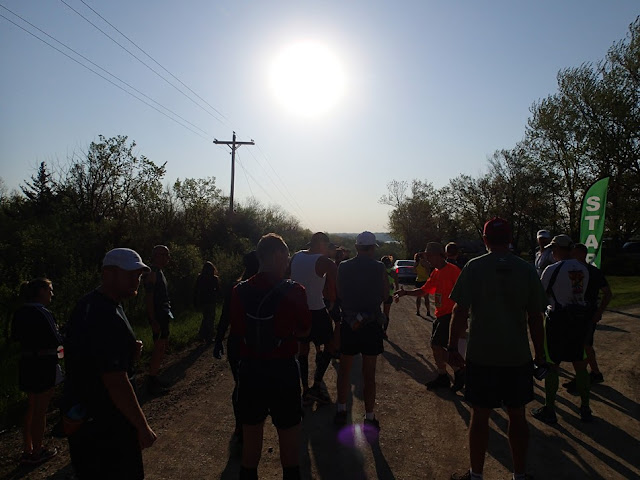 The race started at 8:00. We ran down the gravel road for a short distance and then turned into the trails! 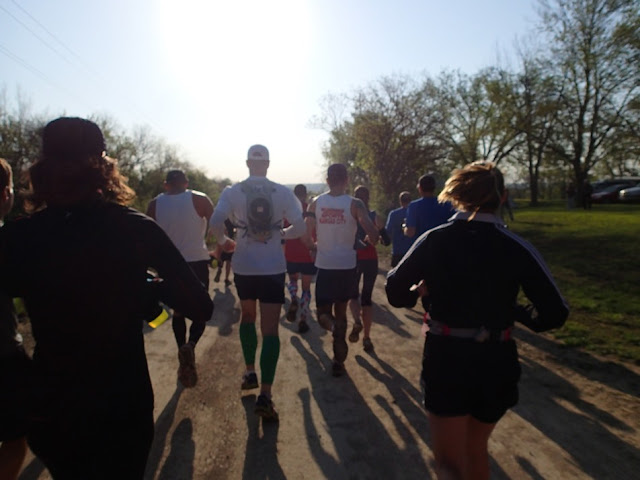 For the first 5-6 miles I was in a line of runners. At first the pace was great, but the front runner would slow/walk on the technical descents, no matter how short. This became increasingly frustrating, but I didn’t pass because they were pulling me along on the hills. 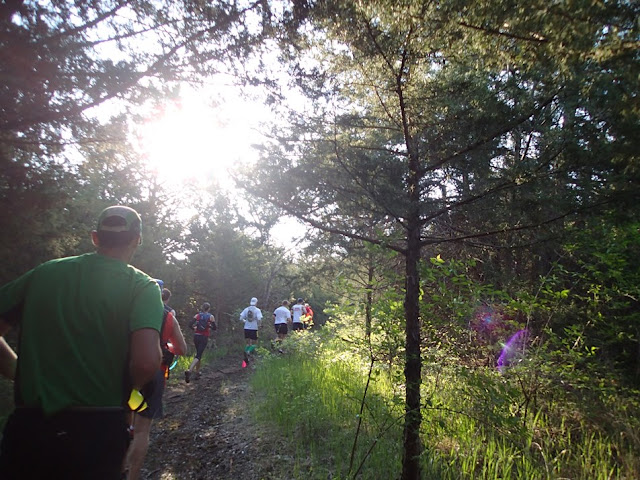 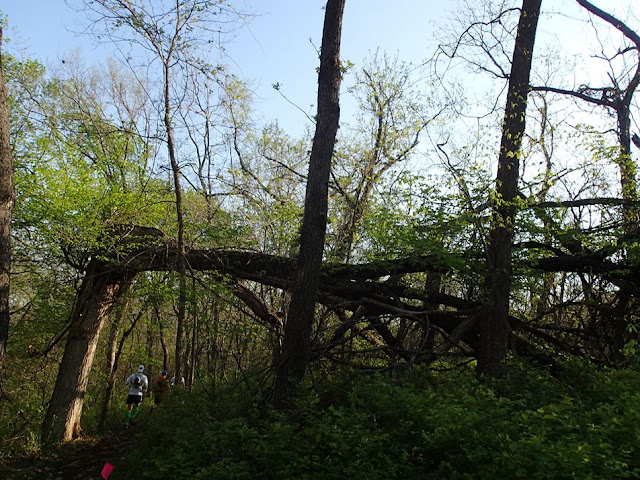 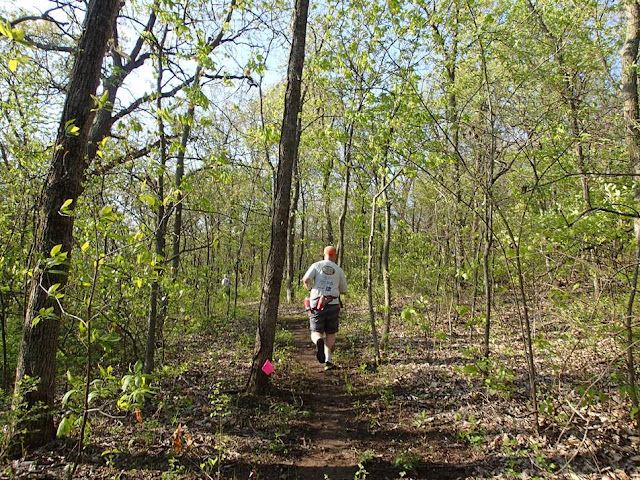 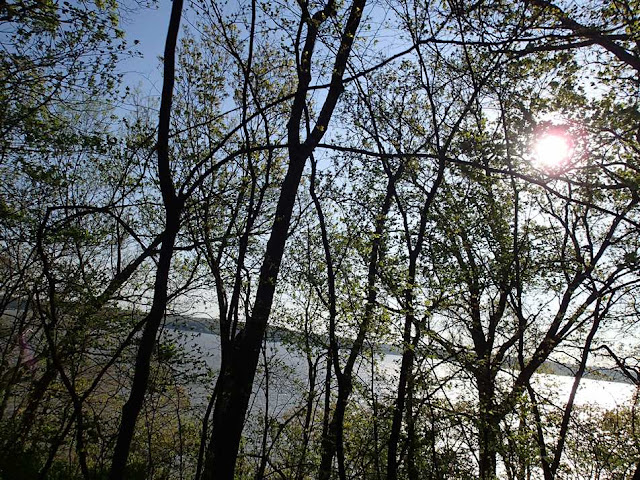 View from the trail during Mile 3. 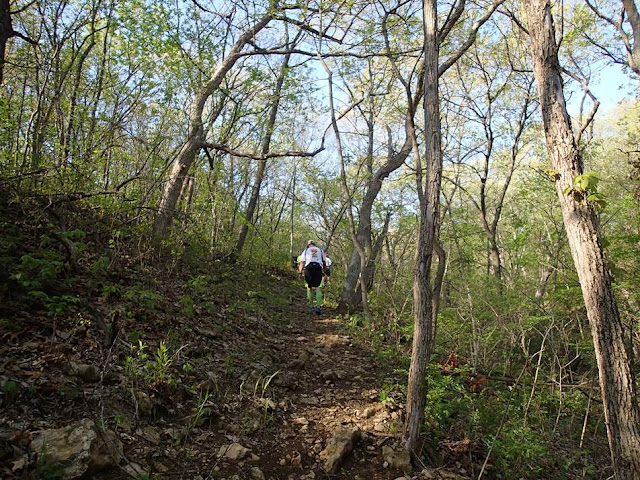 Trail during Mile 3, showing 1 of the many hills along the course. 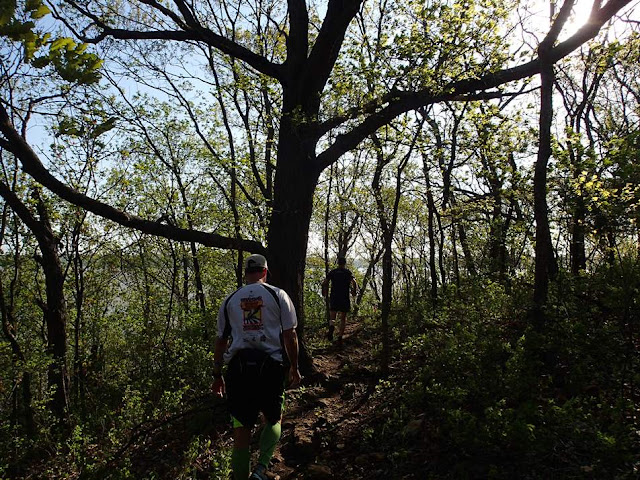 Running along the bluff during Mile 3. 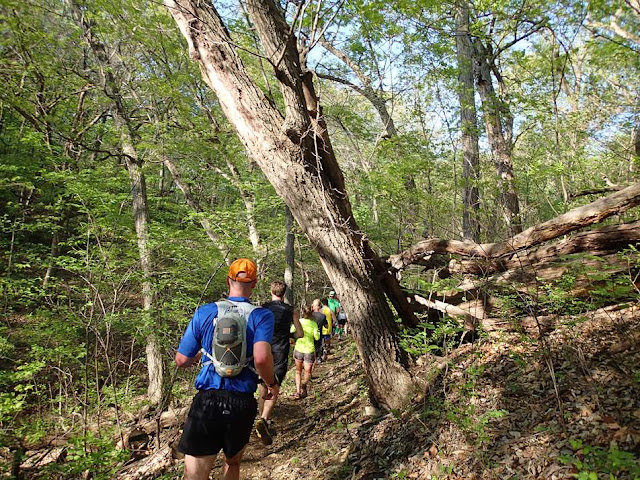 Line of runners during Mile 4. 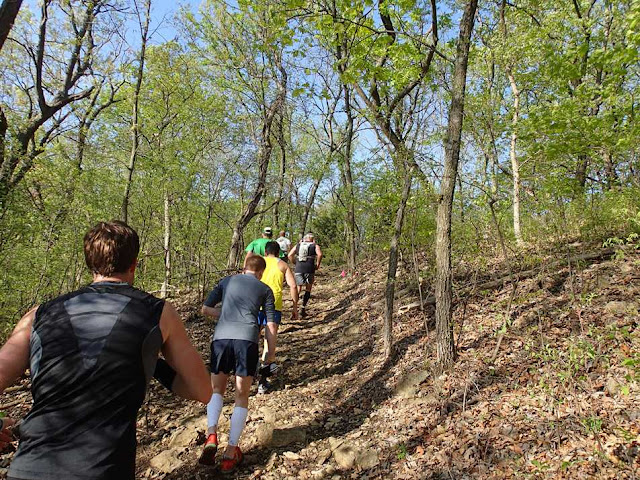 Somewhere around Mile 6 we hit the first manned aid station. I took this opportunity to pass everyone who stopped, and just breezed through. It felt good to be able to run for a little while. 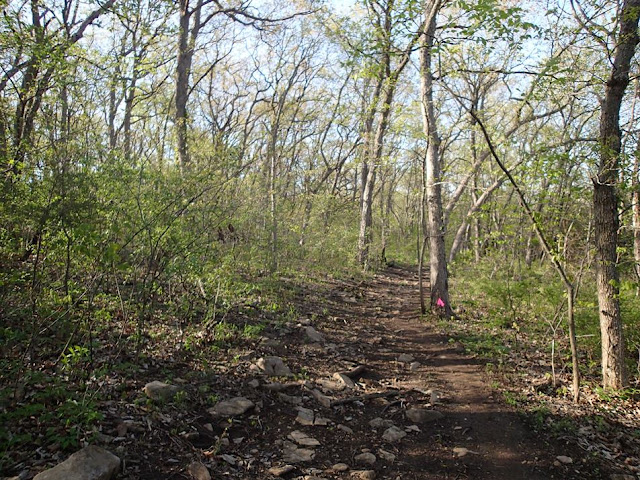 Shortly after passing the aid station. 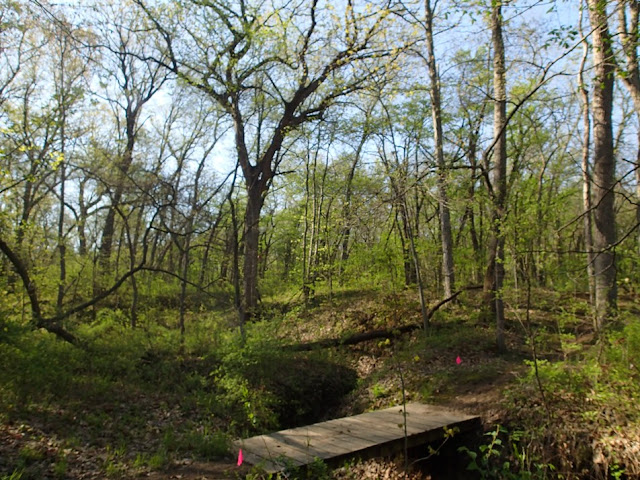 It took about 1.5 miles before I was caught by one runner, and another half mile before a 2nd passed me. At about the 9.5 -10 mile point my left knee started to complain a little. I knew it was being caused due to fatigue of the quads, so I started walking up any hill. I would still run the downhills as the knee didn’t complain.  About mile 11.5-12, my right calf started to get tight. Once again, I knew more fatigue was taking its toll. I started walking more and my pace really fell off. I knew that I would likely meet my goal as long as I didn’t push too hard and cause an actual injury. During this stretch, I was passed by another 3-4 runners. 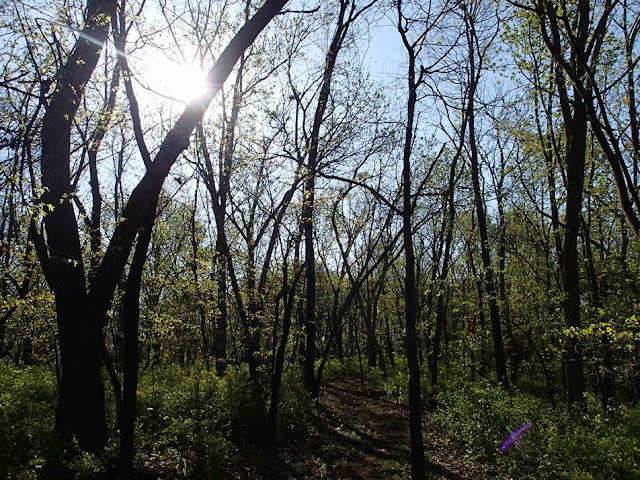 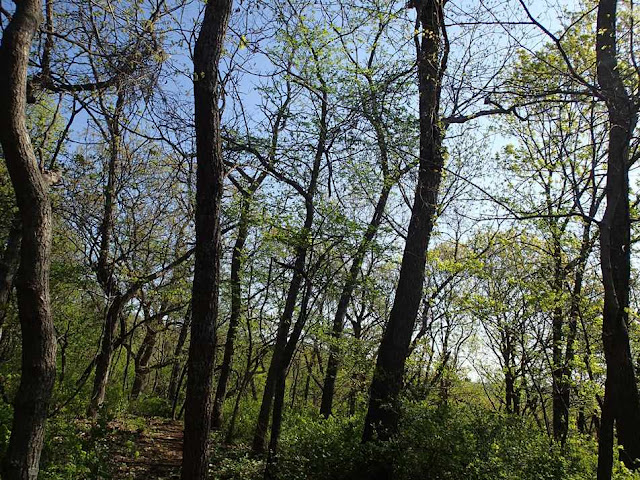 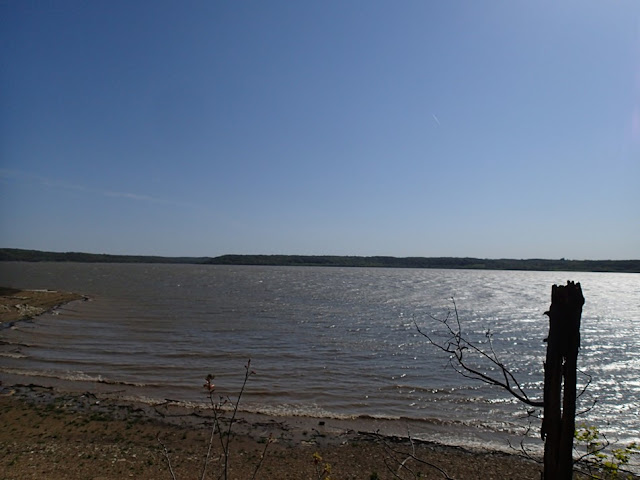 View from the trail during Mile 9. 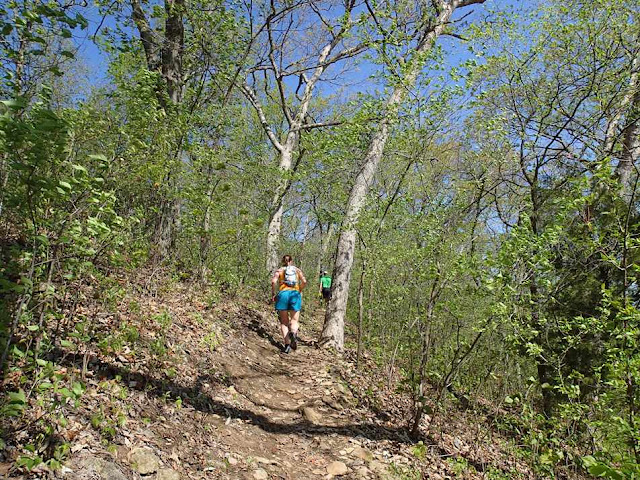 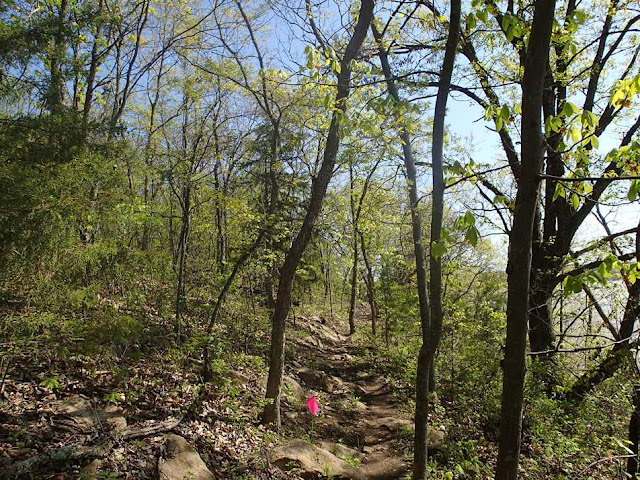 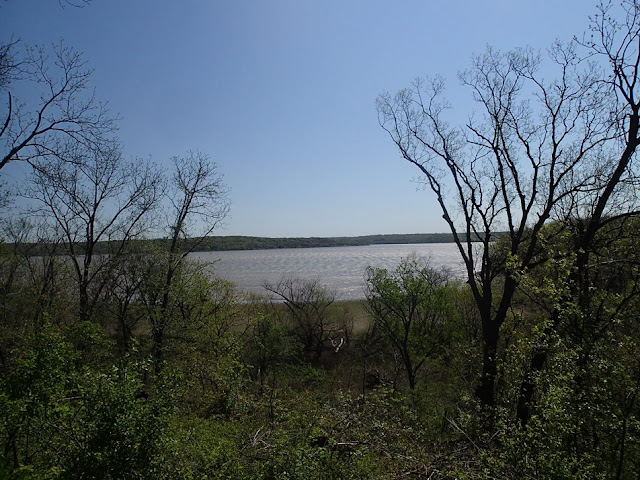 View from the trail during Mile 13.

Once I hit Mile 12 I knew I was home free. I was also really looking forward to the beer I was going to drink at the last aid station. Once there, I was greeted by friends and promptly received my cup of beer. It was great seeing some friends and I spent a couple of minutes chatting before heading to the finish. 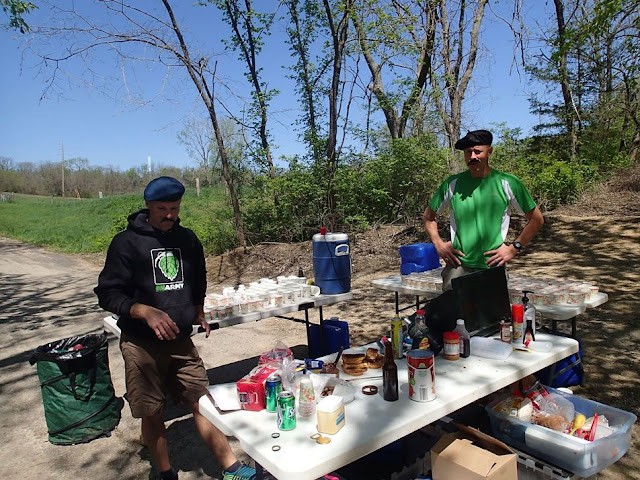 Even with all the issues I experienced, I had a blast! It felt really good to be running on a trail again. The sounds of the birds, the wind through the trees, footfalls on the dampened earth and rocks, wind blowing across the surface of the lake, all added to the enjoyment. I was truly living in the moment, soaking it all in, likely with a smile on my face.

With that being said, the best things about trail races are the other runners and volunteers. Whenever I was being passed during my walking stretches, the other runners would ask how I was doing and provide some encouragement as they passed. I would do the same as I passed other runners.  There is something to be said for the camaraderie that can be felt during trail races. It is one of the reasons that they can become addictive.

My legs are a bit sore, but just the typical DOMS type soreness. I have anticipated the soreness and actually welcome it. It means I am starting to make some real progress. It’s time for me to hit the trails more regularly and hopefully become ready for my first 50K in October.
Posted by Eric at 3:48 PM